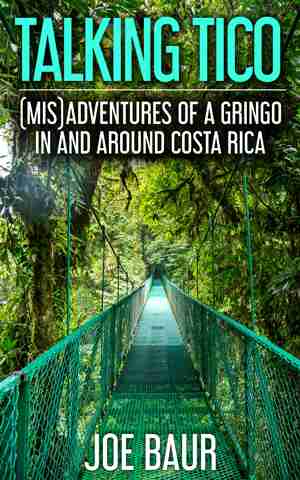 Costa Rica is one of the most sought-after vacation destinations in the Americas with some of the world’s most attractive natural surroundings teeming with wildlife. Most visitors spend years saving up for a trip of a lifetime, or perhaps even a honeymoon, but Joe decided to move there for ten months to get a closer look at life in and around Costa Rica.

Over the course of his time abroad, Joe brings his experiences to life alongside the history of the region as he travels throughout Costa Rica and its Central American neighborhood with stops in Panama, El Salvador, and Guatemala. Xenophobic expatriates, delicious food, vibrant market scenes, an epic battle with Mothra, and inevitable culture clashes all make an appearance in Talking Tico, leaving readers with a new impression of this fascinating region.

Purchase a digital or paperback copy via Amazon.

A portion of proceeds will go towards Centro Arte para la Paz in Suchitoto, El Salvador and el niño y la bola in Costa Rica, so buy a book and feel good about yourself.

“The most astonishing chapter, to me, is Joe’s account of a week-long simulation at UPEACE. Students acted as journalists and aid workers in a political hot zone, where cartels are actively kidnapping and threatening interlopers from other countries. The simulation is all fiction, of course, but Joe recounts getting blindfolded, taken to a mysterious location, and interrogated by hostile men. It’s a real nail-biter of a tale, and Joe allows himself to criticize his peers, whose indecision causes even bigger problems. It’s a tough cautionary tale for people who mean well but have no idea the risks they face in unstable regions.” – Robert Isenberg, author of The Green Season

“I love a travel story that teaches me something new, and this book made me realize that my initial impression of Costa Rica was about as two-dimensional as a postcard. It goes beyond the beaches and really dives into the country’s history and culture. I liked learning what life is like for residents, instead of that whole sand, sea, and umbrella drink thing that books set in “paradise” sometimes fall back on. The stories from beyond the region were a nice bonus.” – Alicia Underlee Nelson, Prairie Style File

“As an Australian, Costa Rica seems like a very exotic destination and it was great to read about Joe’s experiences living there – always a much more in depth experience than just visiting a place. Seems like he and I approach living abroad in similar ways, trying to see as much as possible and saying “yes” to stuff we normally wouldn’t, so I really enjoyed hearing about his experiences and his thoughts about some of the cultural differences and nuances between his American life and what he experienced in Costa Rica. Good stuff.” – Amanda Kendle, Not A Ballerina and The Thoughtful Travel Podcast.

“Talking Tico is a great read for those who want to know the history behind why these cities and places are the way they are. Those who want to really dive deep into a place’s culture, its people, and the everyday life of an expat’s new home – like being trapped indoors by the rainy season or mould growing on clothing, oh, and that night out of a horror movie when they encountered a giant moth, will love this book.” – Stephanie Mayor, The World As I See It

Joe Baur is a travel writer, author, filmmaker, photographer, and podcaster. Hell, he’s even stood in front of groups of people to share his experiences and answer questions, so feel free to add “speaker” to the résumé, too.

Before moving to Costa Rica, Joe contributed a chapter to Rust Belt Chic: The Cleveland Anthology and published Best Hikes Near Cleveland with Falcon Guides. Following those 10 months in Costa Rica, he returned to Cleveland where he launched the Without A Path travel podcast, Best Hikes Near Minneapolis and Saint Paul released, he completed Best Outdoor Adventures Near Minneapolis and Saint Paul, and he continued his independent travel writing and filmmaking with trips to Germany, Ireland, Japan, Honduras, England, and Jordan. Over the course of his career, his work has been featured in a variety of international publications, including BBC Travel, Viator, AFAR Magazine, Yahoo! Travel, National Geographic and more. In August of 2016, he made the move abroad again, this time to Düsseldorf, Germany where he continues his independent travel work and searches for that next big project.

Oh, and he really, really wants to go to Iran.